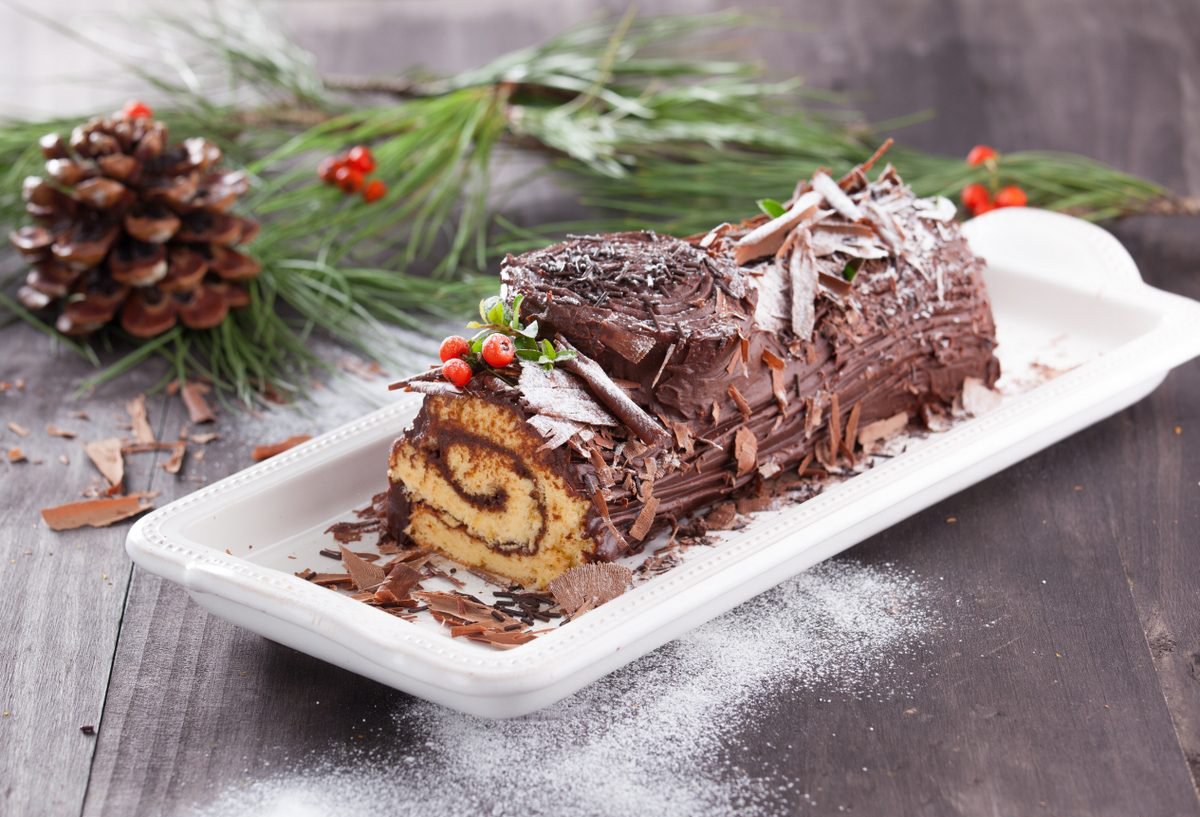 By Yellowfish TransfersDecember 23, 2019 No Comments

As the festive season draws to a close, there’s still time to visit Portugal and taste some of the sweetest pastries the country has to offer.

From deep fried goodies to puddings and chocolate logs (yes, that’s right), this Mediterranean gem’s Christmas treats should be enough for you to visit the country in the winter time. If it’s not, you can draw some satisfaction from the 18 degrees Celsius and the radiating sunshine you’ll get during the day.

If you’ve got a sweet tooth, and the adventurous soul of a traveling foodie, here are the top five treats you should look out for. 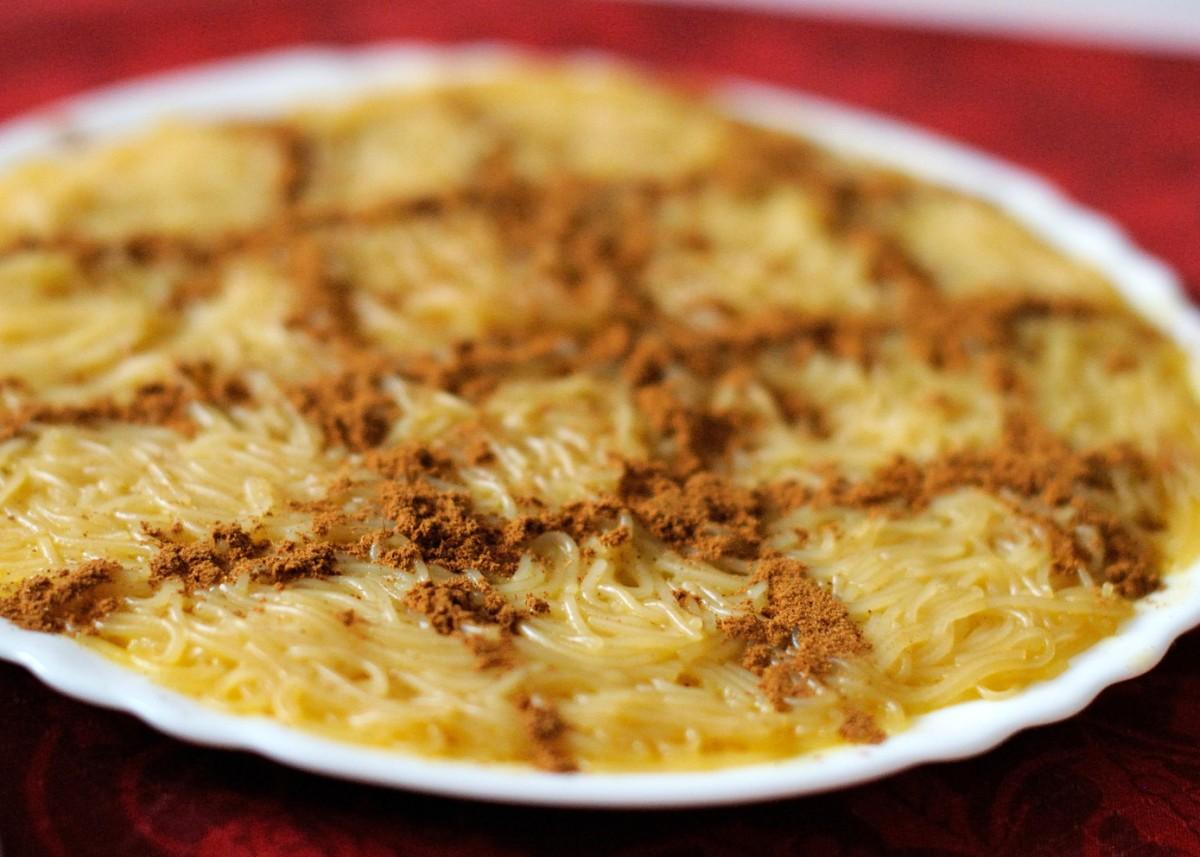 Think rice pudding, but made with vermicelli noodles. Sounds kind of gross, right? But like most disruptive pastries, it’s absolutely delicious.

In a saucepan, add 2.5 cups milk, 1/2 cup water and heat until it boils. Add the sugar, lemon rinds, and butter to the saucepan. Stir it well. Reduce to medium heat. Finally, add the vermicelli noodles and mix again. Let it simmer for about 3-4 minutes. Beat the egg yolks well and then add them to the saucepan along with the last 1/2 cup milk. Stir it well as it simmers for another 3 minutes. When ready, cover with cinnamon powder. 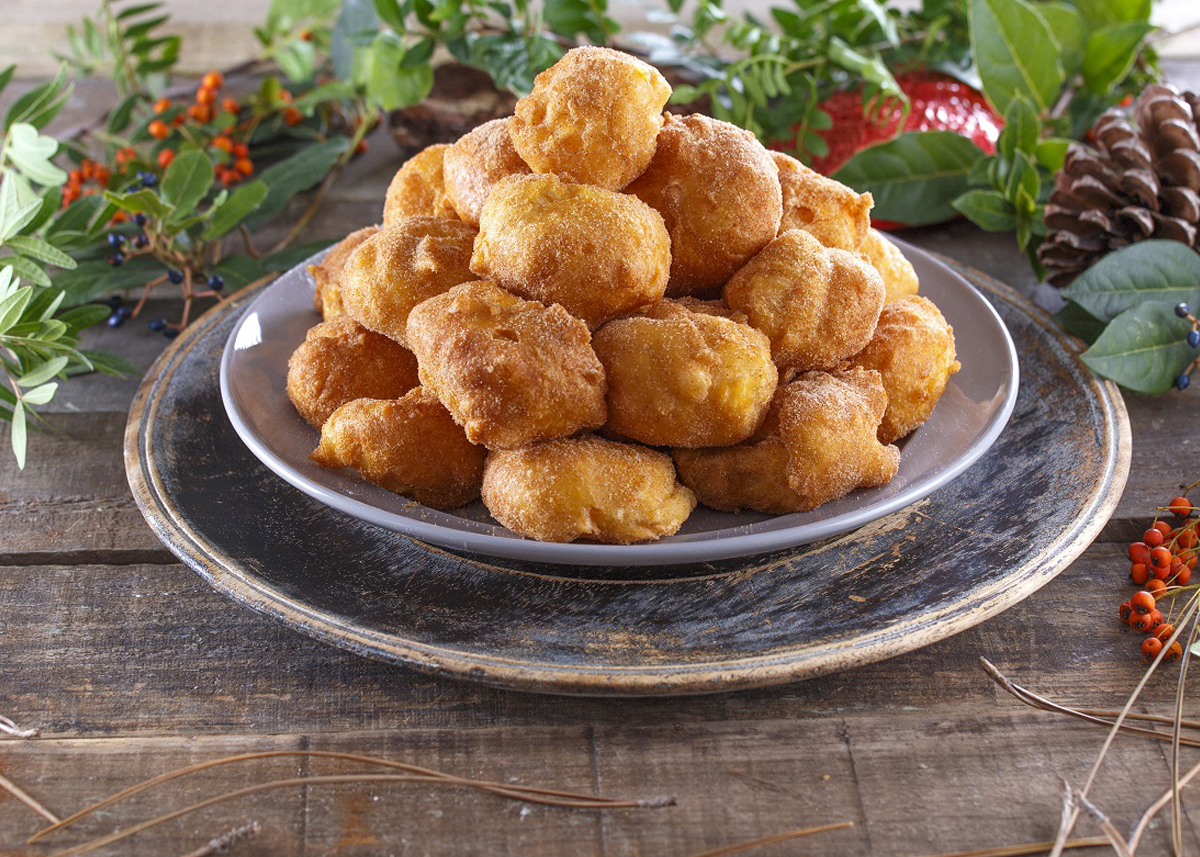 It doesn’t get much better than this. Think of a smooth cloud of sweet pumpkin which melts in your mouth after each bite.

In a saucepan cook the pumpkin with the water and salt. Once the pumpkin is soft and tender, remove the pumpkin and let it strain most of its liquid. If you have a cheese cloth it is best for straining the liquid. If not use a regular strainer. This should take 3-4 hours. In a blender, add the pumpkin, rum, and sugar and blend it until it is a smooth and even consistency. Once done, pour it into a bowl and add the flour and mix it in well. Use a tablespoon and begin to knead the dough into balls for frying. If the dough does not have a strong enough consistency, add some more flour and knead it in accordingly. Pour a one inch layer of oil into a frying pan and begin frying the balls. Usually it takes about 1-2 minutes on both sides until they are golden brown. Fry them individually until they are golden brown, then set aside on paper towels to dry. Once they are all done and fried, cover the fried cakes with sugar and cinnamon. 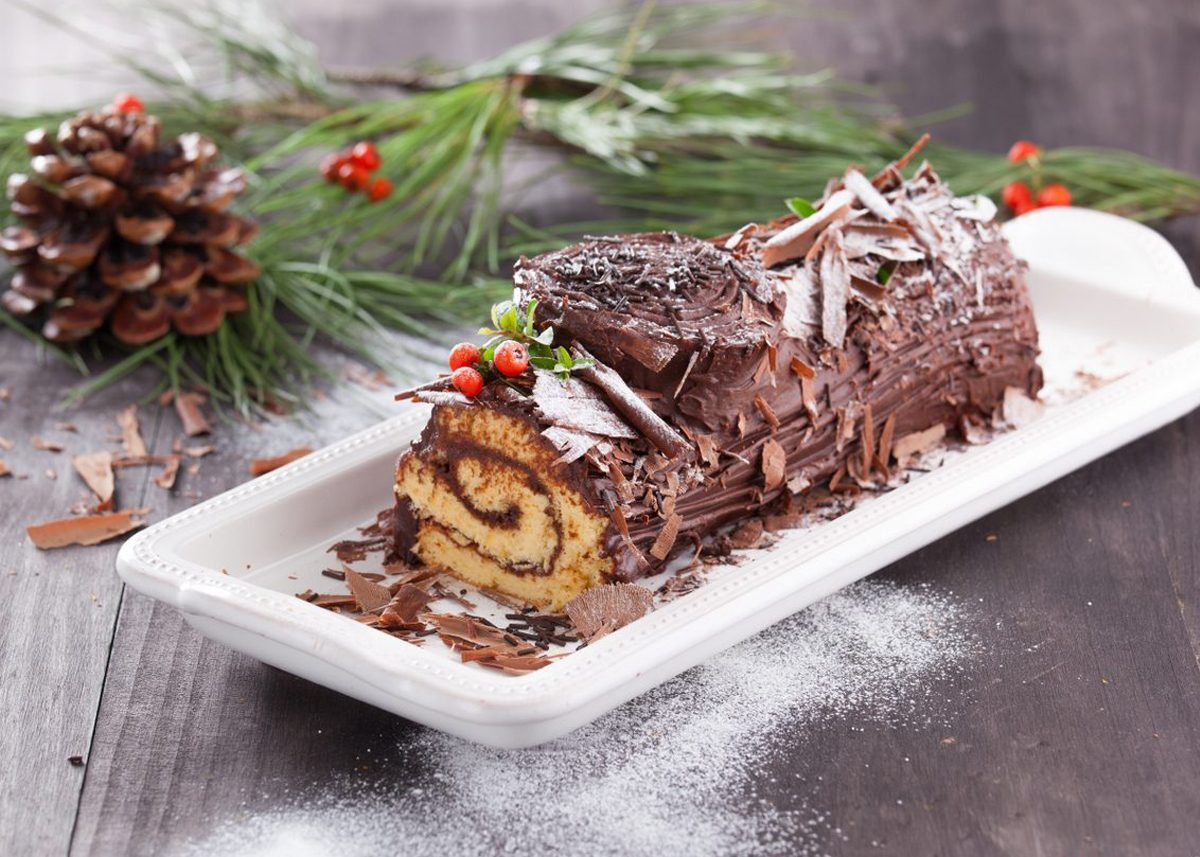 If there is one cake which invokes perfectly the holiday season, it is the Christmas Log. Linked to the need of perpetuating the tradition of using a real log to heat the living room, this chocolate-covered treat will warm your hearts instead.

Mix the eggs and the yolks with the sugar with a mixer for 15 minutes. Next carefully incorporate the flour. Grease a form and cover it with tracing paper also greased. Place the dough on the form and bake it for 25 minutes at 180ºC. Meanwhile, prepare the chocolate cream. Boil the cream, remove from the heat and let cool for a while. Melt the chocolate and let it cool for a while. Then mix them. As soon as the cake is baked take it from the oven, turn the form on a kitchen tea towel and remove the tracing paper. Spread part of the chocolate cream on the cake. Roll it and, using the tea towel, tight it well. Cut obliquely one of the ends of the roll. Place them as if it was a branch of a yule log. Cover the roll with the rest of the chocolate cream. Decorate the Swiss roll with Christmas motifs as you like it. Then your Tronco de Natal recipe is ready to be served. 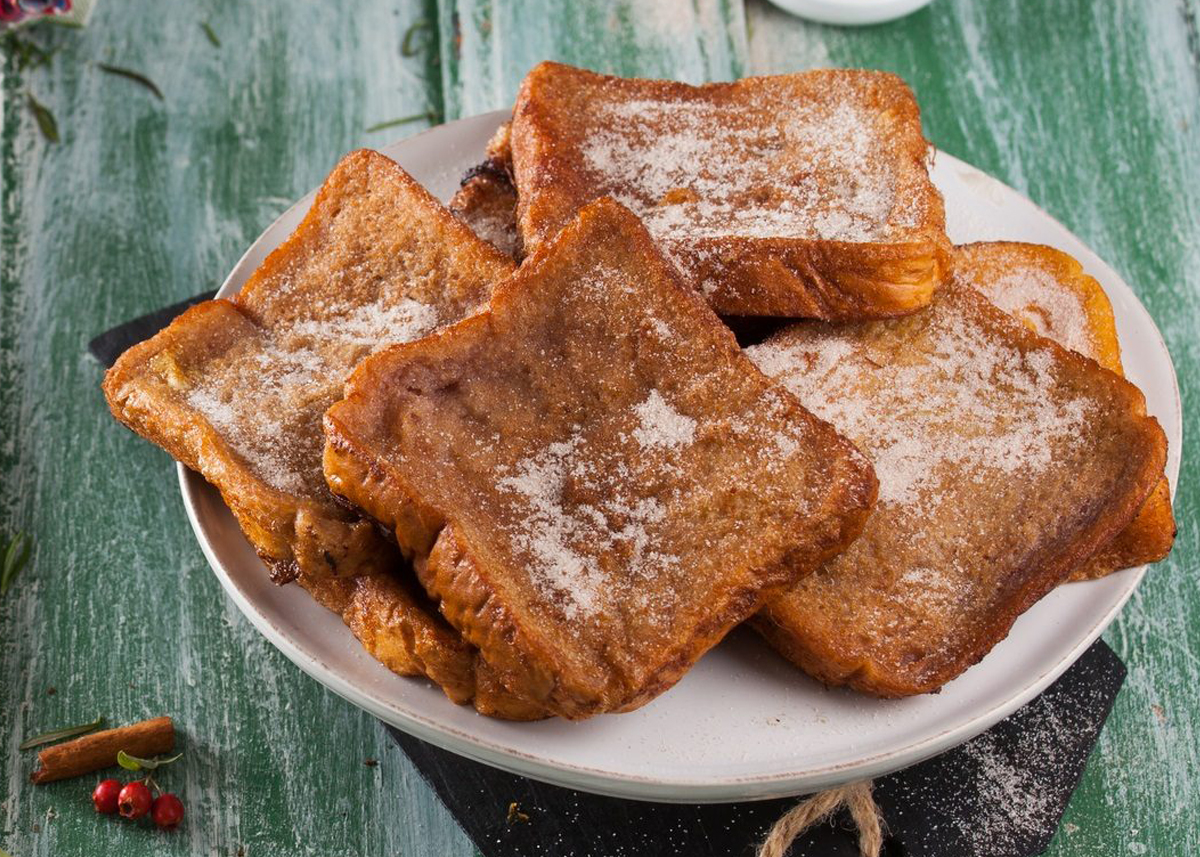 They’re just like French Toast, but better. Much better. Think of a properly sweetened, moist, cinnamon-covered bread slice soaked in egg yolk and warm milk. This is our personal favourite.

In a small bowl, mix sugar and cinnamon until blended. In a large shallow dish, whisk eggs and milk. Dip both sides of bread in egg mixture, soaking lightly. In an electric skillet, heat 1 in. of oil to 350°. Working with a few slices at a time, remove bread from egg mixture, allowing excess to drain, and fry 2-3 minutes on each side or until golden brown. Drain on paper towels. Dip warm rabanadas in cinnamon-sugar to coat all sides. Serve warm or at room temperature. 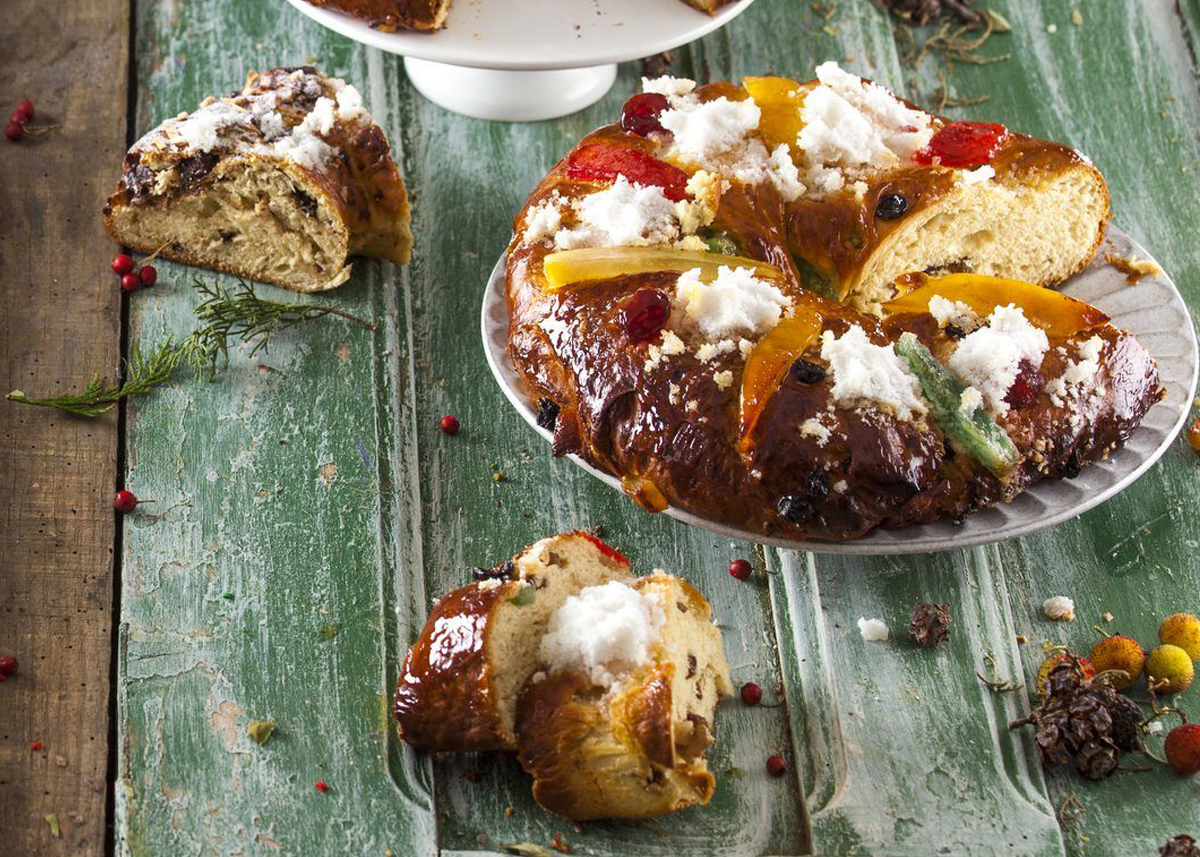 Candied fruits and nuts are holiday classics you either love or hate. We love it, so this traditional centre-piece style cake suits us perfectly.

Warm up the milk to 96ºF . In a bowl dissolve the yeast with 1/3 of the warm milk until totally dissolved. Sift the flour and put 1 cup in a bowl. Make a well in the center and add the yeast with the milk, a pinch of sugar and sprinkle some flour on top. Leave for 10 minutes to rise the yeast. If it doesn’t rise it’s not active and you need to start with fresher yeast. If the yeast rises continue with your cake. Put the remaining 6 cups of sifted flour in the bowl of a stand mixer. Add the flour and yeast from the bowl, the sugar and the remaining milk. Attach the flat beater and mix slowly at first so the flour and milk don’t fly everywhere. When all ingredients are combined mix at medium speed to get a stiff dough.

Add the butter at room temperature, a chunk at a time, the Port wine, the salt and the eggs one at a time. When the dough starts to unattach from the sides of the bowl change the flat beater to a spiral dough hook and beat at medium speed for 15 to 20 minutes. Sprinkle the top of the dough with a little flour, cover with a clean tea towel and put on top of a wooden board, in a warm and draft-free place. Allow to rise for 1 1/2 hours or until doubled. Add all the nuts and candied fruit and mix to divide these evenly in the dough. Take a 2 1/2 diameter cookie cutter and wrap it with a 5 inch wide strip of parchment paper all around. Tuck a bit of the parchment paper under and inside the cookie cutter so it doesn’t open. Butter and dust the outside of the parchment paper. Transfer the dough with the ingredients onto a lightly floured counter top. Line a big square or round baking tray with parchment paper. Transfer the dough and make it into a circle leaving a wide hole in the middle and attach the ends of the log. Cover the cake with a clean tea towel and allow to rise on a wooden board in a warm and draft-free place for 1 hour or until double in size. 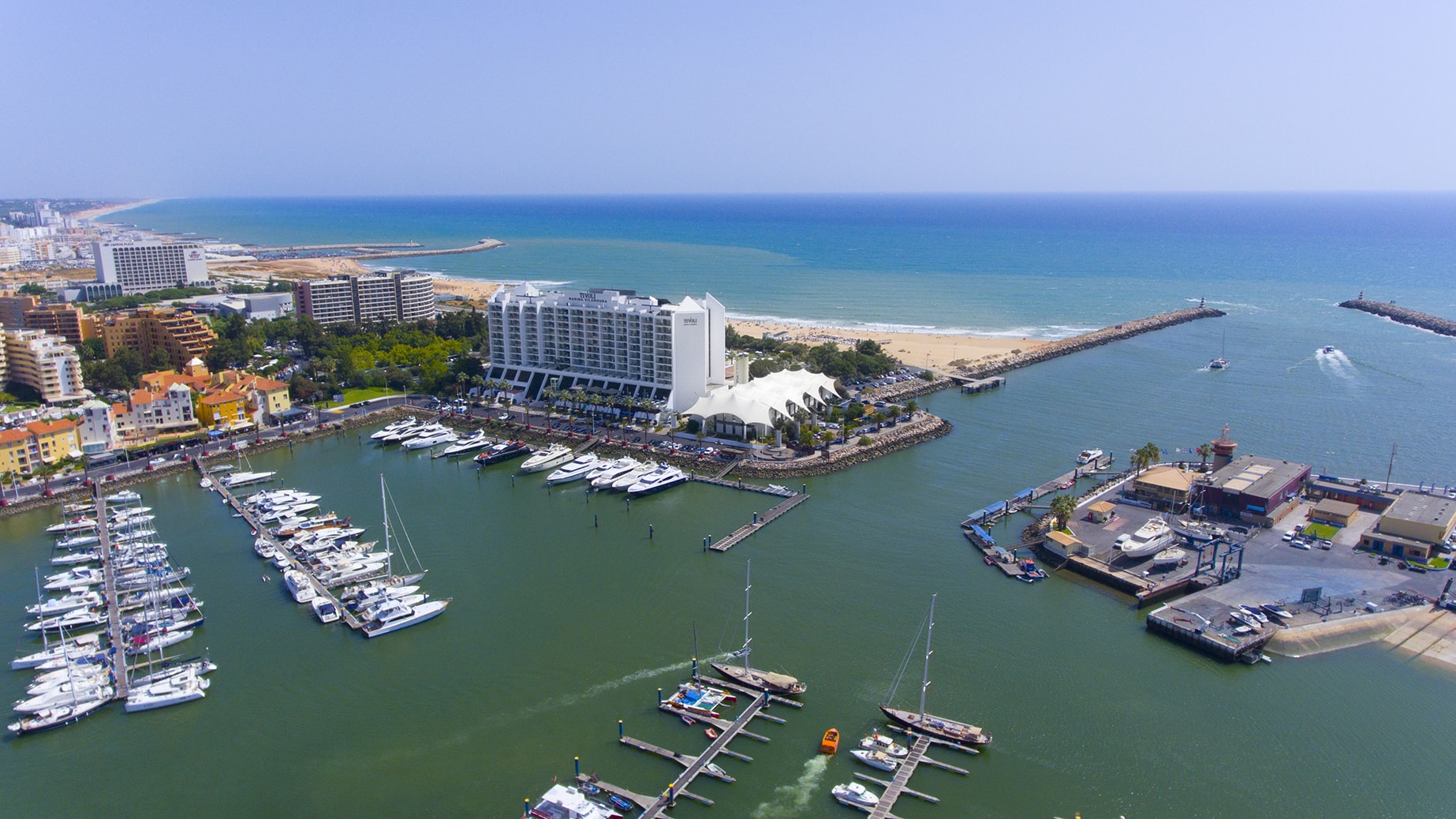 Transfers from / to Tivoli Marina Vilamoura

Transfers from / to Tivoli Marina Vilamoura